Gerard Vroomen, co-founder of Cervélo (alongside Phil White) has taken things further. His brand, Open Cycles, developed the UP (Unbeaten Path) to do away with categories: ‘People see in the UP whatever type of riding they like to do. That’s how it was conceived.’

Vroomen says the UP, despite appearances, is no road bike. He defines it reluctantly as GravelPlus – a bike that’s designed to be ridden quickly, but can handle all terrains.

It’s built around 650b wheels – smaller diameter rims, closer to the size of 26-inch mountain bike wheels than the 700c road wheels we’re all so used to. Open noted that a 650b rim with a 2.1-inch mountain bike tyre has nearly the exact same circumference as a 700c rim with a 28mm tyre, meaning the UP preserves the geometry and feel of a road bike. Plus, because it uses disc brakes rather than rim brakes, the UP’s wheels can be freely switched between the off-the-peg 650b wheelset and any normal disc-equipped 700c road wheel. With wide clearance at the rear and front, any variety of tyre size and width can be used.

Open isn’t the first to release a bike with such versatility, but it stands out as an innovator. Hed’s own Triple Crown frame was designed to do exactly the same wheel switch between 650b and 700c wheels, while Cannondale’s Slate was also designed around 650b wheels. However, the Triple Crown is a fairly weighty touring-minded steel frame, while the Slate is limited by its Lefty suspension fork – there are currently no specific compatible 700c road wheels available. Crucial to the UP though is the design of the chainstays, engineered to a tight 420mm length to give sharp, racy and consistent handling across all wheel types (see The Detail, below).

The idea is that the bike should be as comfortable riding rough trails as it is on the tarmac, but Vroomen reiterates that reserving it for the road would be like ‘keeping a lion in a cage in your apartment’. So with respect to Vroomen, I tested the UP on a variety of terrains, but also rode it on the road just as much as I would any normal road bike. The result was startling.

I was stopped a total of 12 times in my first week of riding the Open UP. Road riders, mountain bikers, pedestrians and motorcyclists all stopped me to ask about the bike and compliment its unique looks. What drew attention wasn’t just its striking colour, or the oddity of its 2.1-inch wheels, but possibly the fact that the UP is surprisingly rapid, despite its wide tyres.

Riding the UP is an education in tyre pressure. The balance between grip and speed becomes palpable. At a relatively high 60psi (for 2.1-inch tyres), the bike zips along happily, and I found myself cruising with ease on the flats at around 30kmh. Once you go above 40kmh, friction does seem to get the better of the equation, and holding speed becomes a real effort. At any speed, though, the amazing thing about the UP is that it feels fast. Partly the small wheels, partly the stiff frame, and partly the light overall weight means that it accelerates unnaturally quickly for its size – a little like a lightweight Brompton spinning away from a set of lights. It just feels animated and alive in a way that few other bikes can achieve without feeling wildly uncomfortable.

Even when I did puncture, the tyre self-sealed with latex minutes later

When the tyre pressure comes down, the bike takes on a very different character. The Schwalbe Racing Ralph tyres are tubeless, and of course very wide, meaning they can take extremely low pressures without fear of puncturing. I went as low as the mid-20s, which isn’t anything serious by off-road standards, but gave the bike a huge amount of grip. I was able to ride up wet, mossy, slimy rock surfaces without any sign of the traction giving way. On the road it made for a cushioned and super-smooth ride quality, the type of buffering that other brands have tried so hard to realise through suspension systems and carbon gimmicks.

My first ride on the Open took me to my most local gravel – a bridelway around a nearby park. It coasted over the gravel with ease, transmitting the rugged road surface throughout, while never compromising on the comfort or smoothness of the ride. The UP took some of the more technical parts of the path – over tree roots and heavily cracked ground – in its stride, where on a road or cross bike I would have been more cautious. The tubeless tyres were also a pleasant surprise, as broken terrain and serious jolts showed no sign of puncturing them. Even when I did puncture on a piece of glass, the tyre self-sealed thanks to the latex sealant inside.

I was having fun, and I soon found myself spending evenings poring over Google Maps searching for tracks, trails and paths upon which I could let the UP loose. I’ve ridden other gravel bikes before and have often felt they compromise too much in the search for versatility – being sometimes sluggish on tarmac yet not quite capable of handling more technical trails. With 2.1-inch tyres and a light and stiff build, the UP is very different.

The real merit of the UP can be best described by a single ride that I did. I shot through the Surrey countryside on the road, then let down the pressure and rode in the North Downs over the type of sludgy mud that I was certain would sink a mere cross tyre. That took me onto rougher tracks, over roots and rocks that were technical but never out of the UP’s comfort zone. I popped out onto hills I didn’t know existed, and descended technical stretches that pushed my ability to the limit. Back on the road, I pumped the tyres back up and whizzed home. It was a surreal mix of punchy road riding and off-road fun.

Yet there’s an even greater level to the UP’s versatility, that became evident when I switched to 700c wheels. With road wheels, the bike had all the character of a crit racer. Surprisingly, it felt similar to aero road offerings – the UP has an impressively stiff frame, and is every bit as fast as you could need.

Often the best solutions are the simplest, and Open has managed to do so much by simply opening up the options of what tyres and pressures can be ridden on the road. A lot of brands so far have seen the possibilities for widening the scope of road riding, with slacker geometries, and the increased tyre clearance made possible by disc brakes. Yet Open has seemingly sprung light years ahead, fully realising the potential of modern tyre, wheel and frame technology. This is truly a rare and exceptional bike, and one that has literally broken new ground. 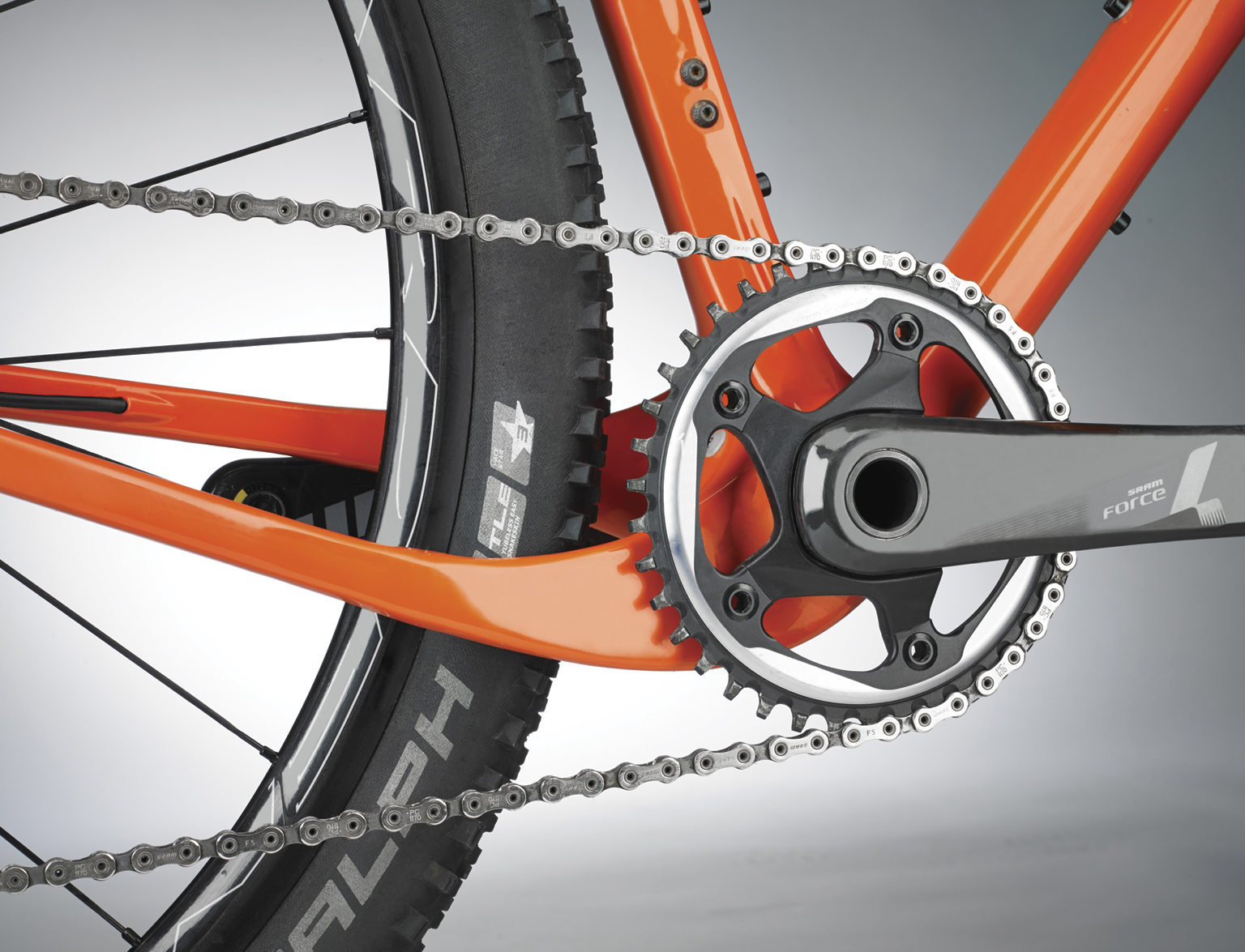 It may seem that swapping between 650b and 700c wheels would be possible with any disc-equipped road bike, but there are significant hurdles. Clearance is a big issue – mountain bikes need longer, skinnier chainstays to accommodate the wide tyres. To fit a variety of wheel and tyre combinations while preserving consistent road geometry, Open had to significantly alter the design of the back of the bike. ‘We wanted to combine narrow road cranks with wide mountain bike tyres, but there’s not a lot of space in-between those two for the right chainstay,’ Vroomen says. To get around the problem Open designed a chunky chainstay that drops down from the bottom bracket, freeing up space around the crank and tyre. The consequence is the versatility of multiple tyre and wheel types, while maintaining a stiff, racy rear end.